Sant Mateu, the historic capital of the Baix Maestrat region

Sant Mateu (San Mateo in Spanish language) is an impressive town which is the historic capital of the Baix Maestrat region, in the province of Castellón. It is one of the richest villages in monuments and landscapes of The Region of Valencia.

This picture was extracted from Castellónplaza

The town origins date back to before the conquest by king Jaime I. Later on, this land was given to the Hospitaller Order. In 1319, the Maestrat region was founded, when the Maestres (Masters) of Montesa and the seigniories of this religious order were joined, so this village became the capital of this area.

During the Late Middle Ages, Sant Mateu was a well-known town to export high-quality wool internationally. This fabric was exported to Florence mostly, where the sanmattee wool coming from Sant Mateu was one of the most appreciated material. Therefore, it was turned into a very important and rich town during this era. Moreover, this small city was visited by the most significant celebrities of this time, such as: San Vicente Ferrer (the patron saint of The Region of Valencia), Pope Clement VIII, king Felipe II, or Pope Benedicto XIII  (Pope Luna). So it isn´t surprising that the Great Western Schism of 1429 was held here.

Throughout the history of this amazing town, there were two walled enclousre. It keeps a section of wall of the 14th century (260 metres) that is located on the right bank of the Palacio river. Originally, it had a diameter of 1,600 metres and 8 access gates. It was declared Heritage of Cultural Interest. In addition, you can find a few remains of the 13th century wall in the San Pedro Chruch and remains of one of the eight gates and one of the towers of the walled enclosure, the Cantacorbs Tower and the Morella Gate (the 14th century) are situated in the Maestrat street.

These pictures were extracted from Evadirte.com

The historical center was declared Cultural Heritage Interest. One of the most remarkable religious architecture is the Archpriestal Church which is located close to the Main Square. Its origins date back to the reconquest by Jaime I in the 13th century. The present Gothic church was built in the 14th century and it consists of a Latin cross plan, side chapels and polygonal apse. Later, this temple was updated many times, such as the Pasión Chapel, which was built close to the entrance, and the San Clemente Chapel, that was built to keep the relics of the martyrs which were taken out from Roman catacombs of St. Priscilla, in Roma. In the dome, it is represented the martyrdom of San Clemente and the Holy Trinity. The octogonal bell tower  is separated from this church and it had a defensive function, so the entrance door is situated 4 meters above ground level. This awesome and bulky building was declared National Heritage in 1931.

The main square is enclosed by several buildings with beautiful porticos and in the center of this place is put the fountain of the Angel (it was made between the 16th and 18th centuries). It consists of stone sphere with four animal heads-shaped pipes and an angel statue on the upper part. This square was designed to put up the weekly market in the 13th century. Another significant fountain is the Virgin´s Fountain (the 17th century) that is located in La Mare de Déu de la Font Square. It is so similar to this fountain, but it is crowned by Gothic statue of the Virgin Mary and The Baby Jesus. 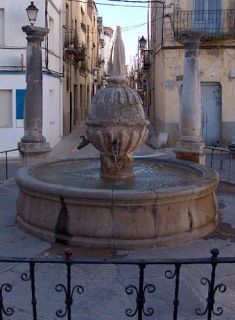 These two pictures were extracted from Evadirte.com

In addition, the Cort Nova (the new town hall) is a short walk from the Main Sqaure. It was built to replace the ancient city hall (Cort Vella) in the 15th century and its architectural style is Valencian civil Gothic. Nowadays, in the Cort Vella, two old dungeons and a small ethnological museum can be visited. In addition, there is a legend about a hermit was imprisoned during the visit of Saint Vicente Ferrer (the Patron Saint of the Region of Valencia) to Sant Mateu. This ermit was tied with shackles and bolts, but prisoner vanished, so people thought he was the Devil.

This picture was extracted from Turismosantmateu.es

Together with the Cort Nova is located the Borrull Palace. It is also an example of the architectural style of the Valencian civil gothic. It was the residence of Mr.Sans, who was the advisor of Order of Montesa’s deputy in the 17th century. After, this building was purchased by Vilanova family, and later on it was inherited by Borrull family. This palace is populary known as L´Audiència (the tribunal), because it was used as the crimanal court of Sant Mateu and the surroundings towns, between 1883 and 1892. The ground floor of this beautiful building can be visited and the Local History Museum Collection that is dedicated to the history of this town. 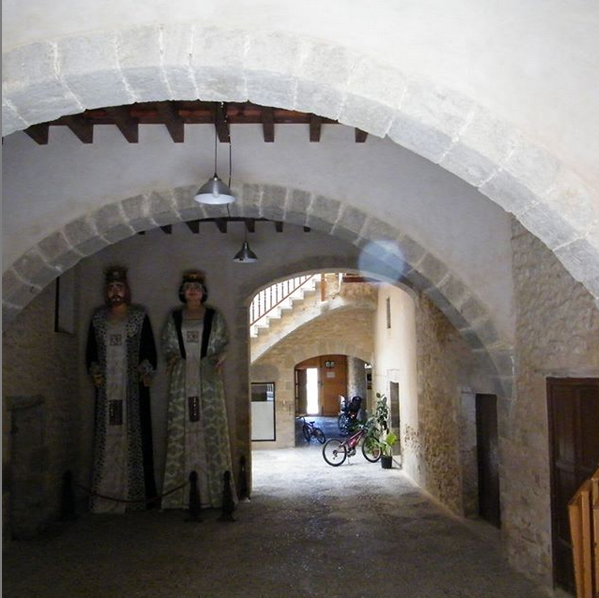 Furthermore, in the same street, you can find the tourist office where there is a medieval wood-fired oven will catch your eye, and which is documented from 1386.

This picture was extracted from Wikipedia

Another interesting buildings are the Marquis of Villores Palace and the Augustinians Nuns church and convent. The first, it is a manor house of the Comí family during the Middle Ages. It was the most important residence of Sant Mateu, many well-known people stayed here such as King Felipe IV. Later, it belonged to the Marquis of Villores in the 17th.

The second building, The Augustinians Nuns Church and Convent was set up in 1590 by nuns who came from the Convent of Mirambel (a beautiful village of Teruel province, Aragón). This complex architectural was built on the ground that the old hospital for poor people. One of the towers of the ancient wall is included in the back wall of the convent, it is known as Augustinian Tower.

On the outskirts of town you can visit several places such as:

This picture was extracted from Turismosantmateu.es

This picture was extracted from Evadirte.com

Moreover, there are many walking trails and mountain biking routes, in which you can discover beautiful landscapes. If you want to know more about these routres, click here .

In addition, several popular and religious festivals are held during the year, such as:

What do you think of Sant Mateu? Would you like to visit this interesting and lovely town? It will take you one and an half hours from Valencia city or 50 minutes from Castellón de la Plana to get here by car.