Spain consists of 19 autonomous communities. The Region of Valencia is set in the east of Iberian Peninsula and it is composed by three provinces: Castellón, Valencia and Alicante. Its capital is Valencia city.

The climate is Mediterranean. It is usually mild, especially on the coast, and summers are slightly warmer and winters are colder inland. The most of the Region of Valencia is occupied by mountains, so it is a rough terrain where you can discover marvelous places.

Its name is owed to the Romans Valentia Edetanorum, which can be traslated as courage or strenght on the land of the Edetanos. In the Arabic era it was named as Balansia, and after the conquest by king James of Aragón in 1238, it was named Valencia.

The flag is known as La Real Señera ( La Senyera in Valencian language). Its is made up of five yellow bands, four red bands and a vertical blue stripe on the left where it is the royal crown. It is the only flag of the world that has the royal status because the king Pere II El Ceremoniós decided to give it the consideration of Royalty in 1337. Therefore, on 9th October, day of the Region of Valencia, La Real Señera is taken down from the balcony of the Town Hall in Valencia city, and it is never bent to anyone. 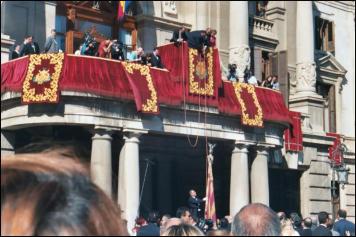 Moreover, on October 9th, La Mocadorà or Mocaorà is held which coincides with the day of St. Dionysius who is the patron saint of lovers in The Region of Valencia, so it is our Valentine´s Day. On this day, the tradition is for men to give the women whait is known as a Mocadorà which consists of a bundle of mazipan sweets wrapped up in a handkerchief.

The Orxata (horchata in Spanish language) is the most popular drink in this area and it consists of tiger nut juices, sugar and water. According to the legend, the word “orxata” comes from the valencian expression “Això es or xata” ( this is gold, snub-nosed) which was said by king Jaime I of Aragon, The Conqueror, when he tasted this drink that a young woman offered to him, after conquering the Valencia city, on the 9th October 1238.

In addition, this area is known internacionally for the paella (the typical dish), sun and beach tourism and the Fallas which is held between 15th and 19th of March. It was declared Intangible Culture World Heritage in 2016. However, this region is more than that, and I´m going to show you some of the most astonishing corners of this zone.

These images were extracted from