This province is situated in the middle part of the Region of Valencia. The capital is Valencia city of the province and of the region. This area has a population of about 2,540,707 inhabitants. It consists of 226 towns and you can find 6 Natural Parks such as Sierra Calderona, Chera-Sot de Chera, Turia, La Albufera, Hoces del Cabriel and Puebla de San Miguel. 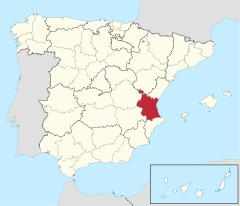 Las Fallas is the most representative party of the whole the Region of Valencia.  Its name means “torch”. It is held between the 15th and 19th of March, and it was declared Intangible Culture Word Heritage in 2016, so this festival is known by everyone.

La Cridà is held on the last Sunday of February in the foot of the Serranos Towers at 8:00 p.m. . Valencian people and tourist meet to hear the speech of the mayor and Falleras Mayores,  and thus to celebrate the official star of events leading up to the Fallas festival.

This picture was extracted from YouValencia.com

In La Plantà day, on the 15th of March, these monuments are set up around the streets of Valencia and la Falla consits of different sculptures which are named Ninots (dolls).

Some events that probably can impress you, they are:

Another important event is La Mascletà is celebrated in the Town Hall Square at 14:00h every day which is a impressive and exciting firework. In addition, you can enjoy fireworks, Mascletàs and street parties that are organized by different Fallas commisions around all city of Valencia.

This picture was extrated from Valenciaplaza.com

Between the 17th and 18th of March, The Offering of Virgen de los Desamparados is held. This virgin is named La Mare de Déu dels Desamparats in Valencian lenguage and she is populary know as La Geperudeta. The falleros and falleras walk and present their flower bouquet to the virgin, and then the flowers are used to make the wonderful  cape of the virgin. The festival ends when Las Fallas are burnt on the night of La Cremà,  the 19th of March.

This picture was extracted from 7valenciatv

If you want to discover more about of the province of Valencia,  you should continue reading Charming Villages!